Reading The Classics: The Iliad by Homer 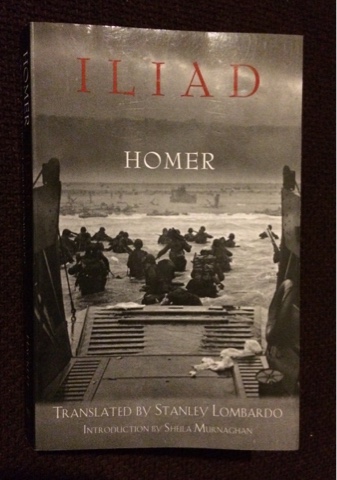 The Iliad, Homer’s epic poem about the Trojan War, might feel like heavy reading, but it’s not. It’s actually the Ancient Greek equivalent of an action movie, and a pretty graphic one at that; there’s no shortage of spurting blood, breaking bones, and guts falling out. It explores all aspects of warfare; the glory, but also the cost.

I picked the Lombardo edition to read, because his approach of using colloquial language sounded fun, and it was. How could you not love stuff like Paris being referred to as “pretty boy” and “you sissy, curly-haired pimp of a bowman” and Zeus telling Hera to “sit down and shut up”?

I also liked the way the similes were in cursive so they stood out of the text. The introduction says that Homer used the similes as a way to make the events more relatable to a Greek living in peacetime by comparing them to something familiar, but I also found them calm interludes amidst all the killing. 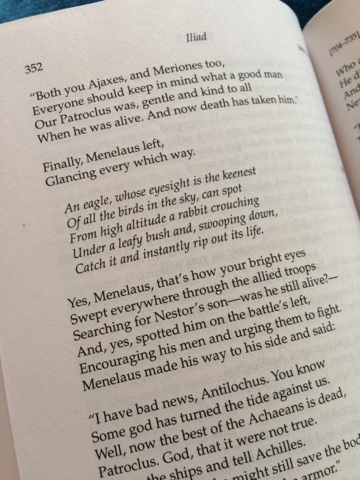 The story begins when the Trojan War has raged for ten years, and it doesn’t end with the end of the war. Even the backstory of Paris stealing Helen from her husband, Menelaus, Agamemnon’s brother, and the unfortunate Judgment of Paris thing (he picked Aphrodite over Athena and Hera in a beauty contest, which explains why some gods are playing favorites) are hardly mentioned. And the Trojan horse thing? Doesn’t even make an appearance.

At the heart of the story is the feud between Achilles and Agamemnon. Agamemnon, after first refusing a rich ransom, is forced to give his war prize, Chryseis, the daughter of a priest of Apollo, back to her father when he sends a plague on the Greeks. As the commander of the army, he’s pissed and humiliated, and takes Achilles’ woman, Briseis, instead. The relationship between the two warriors is already strained, because Achilles is the better fighter. Achilles takes the loss of Briseis as great insult, and sulks in his tent for most of the book, even when reparations are offered.

Why is one man so important? He’s a hero, of course, and it’s implied that he could turn the tide of the battle, maybe end it. Then the Greeks could finally go home. I found Achilles’ attitude petty at first, but the introduction cleared this up. In Ancient Greece, the war prizes were also a measure of a hero’s worth, his honor, so taking away Achilles’ prize was an insult, resulting in loss of honor. Heroes were respected and accustomed to certain privileges. Every time they went into battle, they risked loss of life and limb, so that’s how the system worked: you went into battle, you got loot according to your station. But are station and riches the only reasons to fight? Of course not, as Achilles’ beloved friend Patroclus reminds him. In the end, when Achilles refuses to budge, Patroclus puts on his armor and joins the fight. His death at the hands of Hector, the Trojan hero, finally shakes Achilles out of his funk. The battle between Achilles and Hector feels like the climax of the story.

The Iliad ends when Priam successfully ransoms Hector’s body from Achilles. It felt a bit anticlimactic to me; almost five hundred pages, and the war doesn’t even end? Everything goes on as before? Achilles’ prophesied death doesn’t occur. WTF? Okay, so everything isn’t as before, not really. Homer implies that the loss of Hector means that the Trojans lose the war. It’s inevitable now. And the story does return to the beginning, in a way: compare the botched-up ransom attempt of Chryseis to Achilles accepting Priam’s ransom. Agamemnon doesn’t think a ransom is enough compensation for Chryseis, Achilles feels Agamamnon’s offered gifts aren’t worth his only life (which he risks in battle). In the end, Achilles accepts Priam’s ransom as the only compensation there is and gives him back the body of his son. It doesn’t bring back Patroclus, but it’s all there is. Somehow, Achilles and Priam feast together and can ever respect each other. It’s a beautiful moment.

The Iliad is a fascinating read, and I heartily recommend this translation. It makes the story come to life. You can almost hear the spears and swords clash, the groans and screams. Well worth reading.
Posted by curiousthings at 6:00 AM