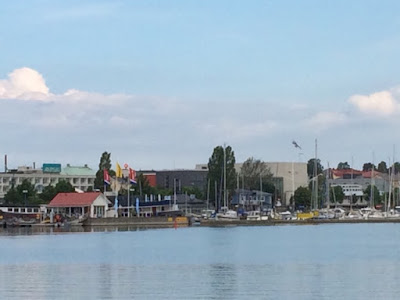 So, I attended Archipelacon a week ago in Mariehamn, Åland, and had a great time. The con was really well organised, the venue was fantastic, and the panels ran like clockwork. Helsinki is up for Worldcon in 2017, and mostly the same people are involved with that, so they get my vote. Haven't voted yet and want to? Go here to join and do (a supporting membership costs 40 USD). As a bonus you'll get to vote in the probably most controversial Hugo awards of all time. (If you don't know what I'm talking about, google "puppygate." There you go.) 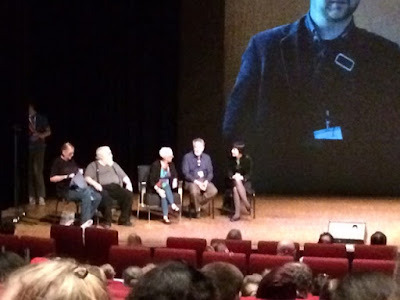 As lots of you know, Parris McBride is very active in the fan community, and she told some very entertaining stories from along the years. My favourite was the one about getting her butt pinched by Mr. Asimov.  It's very different to be a woman in the fan community nowadays, and that's largely due to those first brave ladies that ventured into the male-dominated world of the sci-fi/fantasy fandom. So yeah, we owe you a lot. And btw, she's married to Martin, and she told the story of how they first met (at a convention, in a sauna), aww!

George R. R. Martin needs no introduction. As a fan of his work (SOIAF, of course, but also his short stories), it was great to hear him speak about his work. He came across as funny and genuine, and I enjoyed all the discussion of the books, and the reading. It's interesting to hear how he pronounces some of the words like 'dothraki' etc. There were some interesting questions, too. Someone asked why he didn't have more languages in the book, and he said that it would be more realistic, but interferes with the storytelling, and that he's not Tolkien. Apparently someone wrote to him and asked for basically a dictionary of High Valerian, and he wrote back that he had invented something like seven words of that so far, and he'd invent the eigthth when he needed it. Then the TV show came along, and they actually hired a linguist to create the languages, and now he has to call him up when he wants to say something in Dothraki in the books! Another person asked advice for handling a large cast of POV characters, and the short answer was: don't. He also turned up to listen to a lecture on his work in the academic conference that was held at the same time as this, and probably scared the young researcher giving the lecture half to death:) I didn't actually speak to him because I'm too shy, but he attended all the parties and really interacted with the fans.

Johanna Sinisalo is a Finnish writer who does fantastic and very thought-provoking work. Troll: A Love Story is a great place to start if you aren't familiar with her stuff. I really enjoyed hearing her thoughts on writing and her process (She uses a collage type of thing in her work that's very interesting). She also talked about Nordic weird as a genre with Tidbeck, and it does fit them both, I think, if you feel the need for labels. Sinisalo just got a five year writer's grant from the Taiteen Edistämiskeskus, which is a huge deal here in Finland. It means that you're practically a national treasure, and lots of prestige comes with that. She got a bit emotional talking about that, and we the audience got teary-eyed as well. It's like finally speculative fiction is considered "real" literature.

I didn't make it to most of the academic lectures, but I really enjoyed listening to Mr. Wolfe in those that I did. He's a great speaker and very knowledgeable. He also does reviews for Locus, among others.

Karin Tidbeck was a complete unknown to me, but I read one of her short stories from the programme leaflet and got very excited. She was very funny and likeable in the interviews, too. I tried to find her short story collection Jagannath at the vendor stalls, but nobody was selling it? This was weird, because you'd think that people would want to buy the books by the featured writers. But then I remembered buying the book bundle of weird fiction curated by Mr. VanderMeer some months ago, and discovered that the book had been in my Kindle all along! Of course I read it immediately, and I heartily recommend it. She translated the stories herself, and the fact that English isn't her first language shows in a few places, with the stories that got published in major magazines and the later stories being the most polished ones, but all of them are very weird and unique in a Gaimanish way. The afterword about the difficulty of translations and concepts that don't translate was very illuminating to me, because this is an issue I run into in my own writing, too.

There were also two writing workshops at the con. The first was on creating a living milieu with a Finnish writer Magdalena Hai, which I really enjoyed, especially the technique of closing your eyes and imagining that you're your character, and then thinking about what she hears, sees, smells, tastes, and how she talks. I'll definitely use that one.

The other one was run by Gaie Sebold on creating characters. It wasn't that great for me, because it was in English, and it was supposed to be for ten people, but at least twenty showed up. Sebold had had to shorten the workshop from two hours into an hour and forty-five minutes, so it felt a bit rushed, and all the writing exercises were only five minutes. I got total brain-freeze, and then the people who read their work were so fantastic that I was intimidated in spite of myself (you know the feeling that ok, I'll just go paddle in the kiddie pool and leave the adults to their work?). Then Sebold asked me a question and I just froze. Yeah. These things happen, but it was kind of embarrassing. Maybe it's just me, that I'm not great at writing under pressure? I much prefer having time to do the work. I did the Terribleminds challenge that night just to prove to myself I could, and it made me feel a bit better:) And I did get to meet one of the people from my Finnish online critique group, and that was fun. 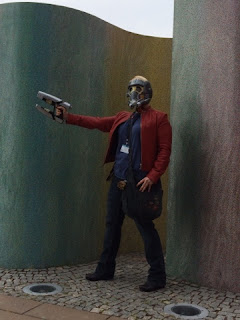 This is me cosplaying Star-Lord. A friend was dressed as Commander Shepard, and another as Starbuck, and we thought it would have been crazy cool to try the Starship simulator they had at the con, but unfortunately we never made it that far. 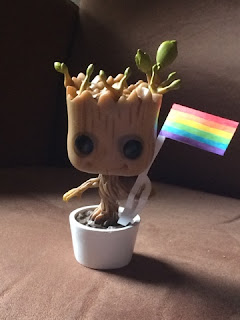 Helsinki Pride was going on at the time of the convention, and one thing led to another:)

My friend borrowed baby Groot for a while, and somebody asked if he was a baby Ent! Lol!

So yeah, great con. Can't wait for the next one!