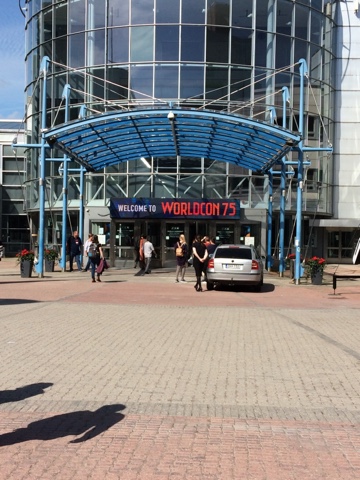 Yay, I made it through Worldcon in one piece! I'm probably the only pregnant woman ever to be totally okay with missing my due date... All in all, I'm glad I took the chance; the baby seemed happy to stay where she was and this was a once-in-a-lifetime opportunity. According to the organisers, this year's con turned out to be the second largest Worldcon ever, with 10,516 members and day passes and 7,119 people on site.

On Wednesday the con site was very crowded and a lot of people missed the panels they wanted to attend, including me. I didn't get into the opening ceremonies or the Tea and Jeopardy podcast afterwards, but as both can be viewed/listened to online, that wasn't the end of the world. Not that much could have dampened my spirits anyway; I was just so happy that I could attend the con after being sure it would be impossible for me to go because of the baby.

I caught a panel on fashion in science fiction, but unfortunately they had technical difficulties and didn't get much discussion in. By then I had wised up about the queues and turned up an hour early for the next panel I wanted to see: Creating Effective Dialogue with Elizabeth Bear, Nalo Hopkinson, Nina Niskanen, and Ran Zhang. Most of the things they talked about were familiar to me from writing books, but the panelists did have an interesting discussion about incorporating dialect in dialogue and also about how writing dialogue is different in different languages. Hopkinson and Bear had taught Niskanen at Clarion, and both seemed like they'd be great teachers, not scary at all. If I have a chance to attend a workshop with one of them, I definitely will. This time I didn't sign up for any workshops because I didn't want to take up a spot and then have to skip it if I started to have contractions or felt ill. I'd have liked to see a few more panels, but the ones I wanted were full, so I decided to check out the art show and the Hugo awards on display. Nice, huh? 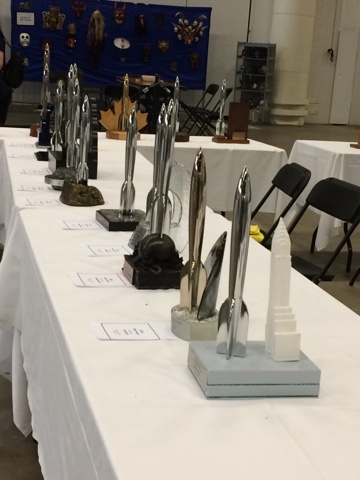 Hugo awards through the ages.

On Thursday the organisers had limited the sale of day passes, closed down the sale of memberships, and negotiated with the venue to get a few larger rooms. It made all the difference! The first two panels I attended, In Defence of The Unlikeable Heroine and Appeal of The Bland Protagonist, were both interesting. I missed Nalo Hopkinson's GoH interview though, because I didn't want to lose my seat. (My friends later told me that there had been plenty of room, but you can't have it all.) I especially liked the unlikeable heroine panel and the way the panelists pointed out the double standard happening with unlikeable male and female protagonists. Have you noticed that most unlikeable female protags are conventionally attractive to compensate being so unlikeable? And how readers will forgive a male protagonist a multitude of sins while condemning a female protagonist for something relatively minor? (Case in point: Jaime Lannister vs. Catelyn Stark. One throws a child out the window, the other one dislikes her husband's bastard. Who do the readers turn on? You guessed it...)

I also made it to a panel on working with editors and one on military science fiction by women authors. By then it was almost five o'clock and I was so tired I went back to my hotel to rest. 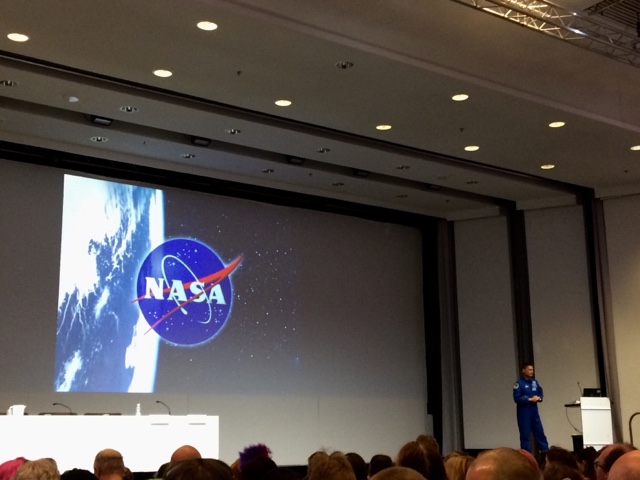 On Friday I made it to astronaut Kjell Lindgren's space medicine lecture and learned some fascinating facts, like how they have to be extra careful on the ISS about looking for things in small compartments (the CO2 builds up and makes you sick) and that all the calluses slough off the soles of the feet in zero gravity.  Can't wait to use all this stuff in a story! Turns out space medicine is mostly about prevention: they pick the healthiest candidates to go up, have them do regular exercise and eat specially designed food to keep them healthy, and take lots of test to catch any problems early. If something unexpected happens, they'd rather send the patient down to Earth than try to treat him or her on the station. 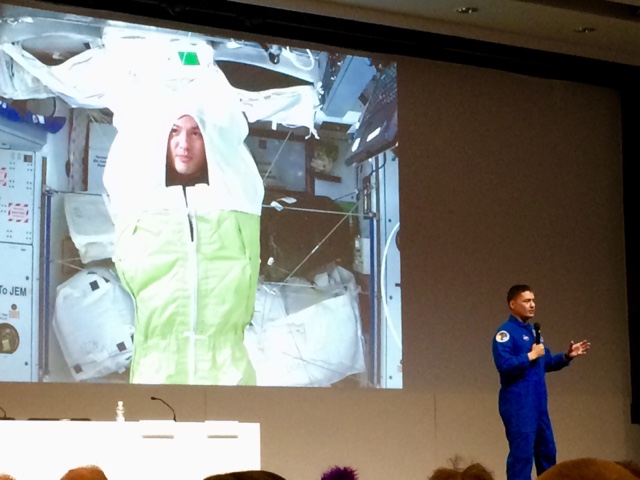 This is how they sleep on the station. Notice the puffiness of the face caused by fluid redistribution in the absence of gravity.

Another highlight was the Military SF: Pro-War or Anti-War panel with Joe Haldeman, a living legend. I also made it to Nalo Hopkinson's GoH presentation where she read excerpts from unpublished work. Intriguing. Can't wait to read more of her work. I also checked out a panel on monsters, which was fun. 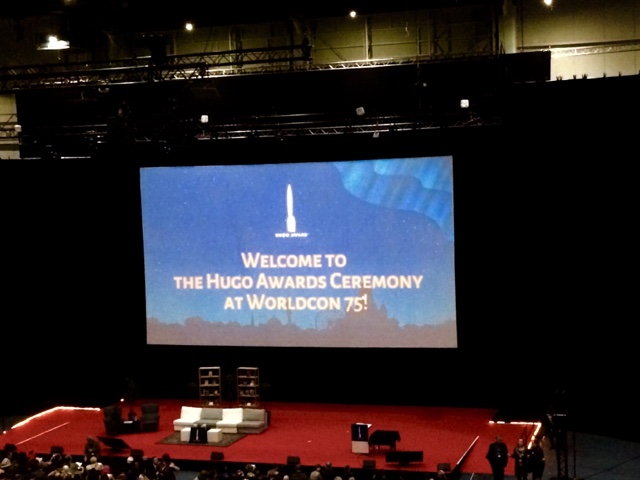 And of course I attended the Hugo awards. Extremely cool.

On Saturday I made it to the Legacy of Buffy panel, a lot of fun and very nostalgic. The panel was so full that not everyone got in, so I guess Buffy is still going strong. Then I went for the Finnish Weird panel and a panel where authors talked about their cats. (Yes, really.) Again, I missed out on the extremely popular world-building panel with George R. R. Martin, but was first in line for the Joe Abercrombie interview, so that turned out okay. Abercrombie is a very entertaining speaker, so definitely go see him if you get a chance. 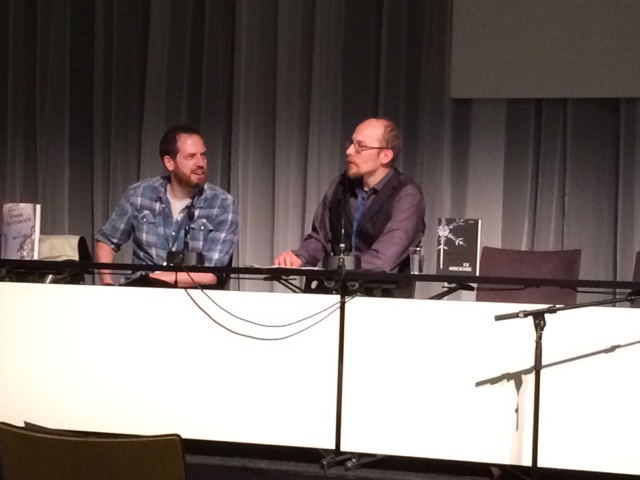 After the interview I hooked up with my Finnish critique group for some writing talk over smoothies and then headed to my last panel, Does Familiarity Breed Contempt in Horror?, before the Masquerade.

My husband and I had decided to skip Sunday's program earlier, and it was nice to sleep in and have a leisurely breakfast before catching the train home. There's one good thing about being very pregnant when attending a con: I did almost no shopping despite all the glorious steampunky goodness on display at the trade hall. The idea of having to carry anything extra around with you while dealing with backache and joint pain etc. is a good deterrent.

All in all, a great experience. I'm definitely happy I went, even though I caught a cold somewhere along the way. (The infamous con crud, maybe?) Hopefully it'll pass before the baby decides to make an appearance. The next Worldcon is in San Jose, but it'll be held in Dublin in 2019. Here's hoping I'll get to attend that one too.

Posted by curiousthings at 1:20 AM