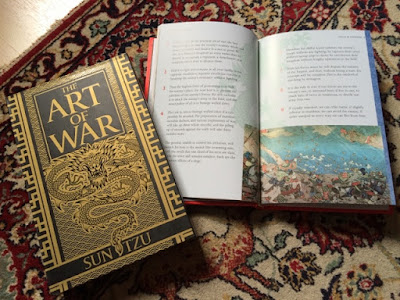 The Art of War by Sun Tzu is one of those books I've been meaning to read for years, and when my husband picked up this beautiful illustrated edition published by Arcturus, I couldn't resist. It actually surprised me how short this was; I finished it in about an hour. This edition also has an afterword with modern applications of Sun Tzu's teachings, from military to sports to business, which I found quite interesting.

Military strategists from Napoleon Bonaparte to General Patton have studied this book, and Sun Tzu's teachings are still relevant in modern military campaigns (one of the examples in the afterword is the US operation Neptune Spear where they went after Osama bin Laden).

Now, I'm not about to start any real-world wars, but sooner or later I'm going to write about imaginary ones. Maybe there's something to learn here, even if my wars are fought in outer space with plasma weapons or in fantasy landscapes a-dragonback?

3 The art of was, then, is governed by five constant factors, to be taken into account in one's deliberations, when seeking to determine the conditions obtaining in the field.
4 These are:
(1) The Moral Law;
(2) Heaven;
(3) Earth;
(4) The Commander;
(5) Method and Discipline;

The moral law means that the war is justified; kind of hard to lead people to war if the majority of them don't agree about its cause. Heaven means the seasons etc.; earth the distances and the terrain; the commander, his virtues and flaws; and method and discipline have to do with your army. These are all things you need to take into account in your world-building, and are great chances for building conflict, too.

The seven considerations that can be used to forecast victory or defeat are, according to Sun Tzu:

13
(1) Which of the two sovereigns is imbued with the moral law?
(2) Which of the two generals has most ability?
(3) With whom lie the advantages derived from heaven and earth?
(4) On which side is discipline most rigorously enforced?
(5) Which army is stronger?
(6) On which side ware the officers more highly trained?
(7) In which army is there the greater constancy both in reward and punishment?

This makes perfect sense. In writing, you want to create conflict, so it's probably best to balance these accordingly, so that each side has some advantages. A lot of the time in stories the protagonist is fighting agains enormous odds, so the situation is inherently out of balance. If the Dark Lord of Evil has a strong army, then Protag and Co. need to have most of the other stuff going for them, probably?

18 All warfare is based on deception.

Yes. And deceit and betrayal make for interesting stories.

19 Hence, when able to attack, we must seem unable; when using our forces, we must seem inactive; when we are near, we must make the enemy believe we are far away; when far away, we must make him believe we are near.
20 Hold out baits for the enemy. Feign disorder, and crush him.
21 If he is secure at all points, be prepared for him. If he is in superior strength, evade him.
22 If your opponent is of choleric temper, seek to irritate him. Pretend to be weak, that he may grow arrogant.
23 If he is taking his ease, give him no rest. If his forces are united, separate them.
24 Attack him where he is unprepared, appear where you are not expected.
25 These military devices, leading to victory, must not be divulged beforehand.

Hey, the novel practically writes itself!

So, who wins? Here's a quote from Attacks by Stratagem:

17 Thus we may know that there are five essentials for victory:
(1) He will win who knows when to fight and when not to fight.
(2) He will fight who knows how to handle both superior and inferior forces.
(3) He will win whose army is animated by the same spirit throughout its ranks.
(4) He will win who, prepared himself, waits to take the enemy unprepared.
(5) He will win who has the military capacity and is not interfered with by the sovereign.

Okay, that's all and well for plotting, but what about characters? Aren't they the most important thing to consider? If you have major warfare going on, I'm betting that one of your characters is some kind of military commander. Sun Tzu has some things to say about that, too, in Variation in Tactics:

12 There are five dangerous faults which may affect a general:
(1) recklessness, which leads to destruction;
(2) cowardice, which leads to capture;
(3) a hasty temper, which can be provoked by insults;
(4) a delicacy of honour which is sensitive to shame;
(5) over-solicitude for his men, which exposes him to worry and trouble.

Go on, pick a fault for your commander. You know you want to.

I'll leave you with this last thought from Attack by Stratagem:

1 Sun Tzu said: In the practical art of war, the best thing of all is to take the enemy's country whole and intact; to shatter and destroy it is not so good. So, too, it is better to recapture a regiment, a detachment or a company entire than to destroy them.
2 Hence to fight and conquer in all your battles is not supreme excellence; supreme excellence consists in breaking the enemy's resistance without fighting.

This probably wouldn't make for a very interesting story, but I do like the thought.

Sources:
All block quotes are from The Art of War by Sun Tzu